Aboriginal and Torres Strait Islander viewers are advised that this website may contain images of people who have died.

Establishment of Mapoon on Traditional Lands 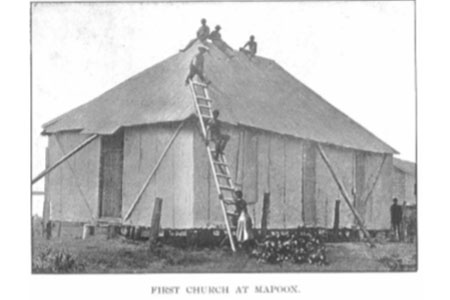 Mapoon community is situated on the traditional lands of the Tjungundji people.  A church mission commenced near Trathalarrakwana (unconfirmed spelling of a Tjungundji word meaning ‘Barramundi story place’) now known as Cullen Point on the 28th November 1891.  Mapoon Mission was established under the name Batavia River Mission by Moravian missionaries on behalf of the Presbyterian Church of Australia, with Queensland Government financial assistance, on land reserved by the Government under the Crown Lands Act of 1884.   Within a few years the mission became known as Mapoon, a Tjungundji word meaning ‘place where people fight on the sand-hills’.   Mapoon has also been known as Marpuna.  As the influence of the mission widened in the surrounding lands, the reserve was extended south to the Mission River near Weipa.  Some of the traditional owner groups who eventually came to live at Mapoon included the Mpakwithi, Taepithiggi, Thaynhakwith, Warrangku, Wimarangga and Yupungathi people.

People with historical connection to Mapoon 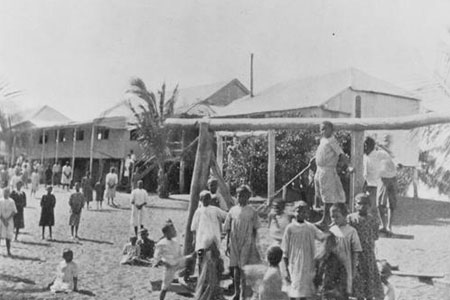 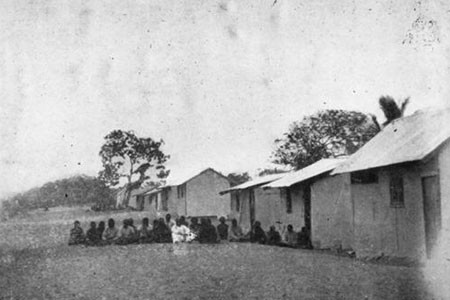 In October 1901, Mapoon was gazetted as an industrial school under the Queensland Industrial and Reformatory Schools Act and Northern Protector of Aboriginals W.E. Roth noted in his annual report that prior to this time the government had been sending to Mapoon ‘waifs and strays from the Gulf country generally, but so far without the legal status of their being “neglected” children.   He added that the ‘Protectors are thus able to deal summarily with the Gulf children’ which meant that police officers in Protector roles could remove children from their families or clan group and send them into the dormitory system at Mapoon.

For about the next thirty years, many mixed-descent children were removed from their families on stations and towns, such as Burketown, Croydon and Normanton, in the Gulf country and sent to Mapoon to be raised by the missionaries.  Many of these removed people were also “adopted” by the traditional owners to give them a safe home in the traditional country that was foreign to them.

To assist the missionaries to train Aboriginal people in agriculture, carpentry and other pursuits, South Sea Island people were brought to the mission from Samoa, the New Hebrides (now Vanuatu) and the Solomon Islands.  Some of their descendants, along with the descendants of Aboriginal people removed from the Gulf region, live in the Mapoon community today. 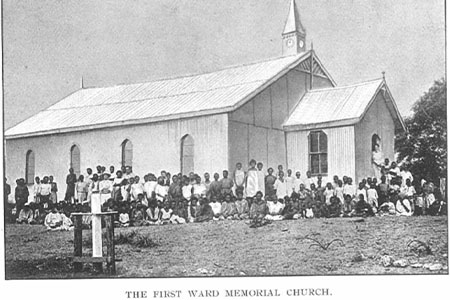 Following the proclamation of the Aboriginals Protection and Prevention of the Sale of Opium Act in 1897, church missions were increasingly influenced by government legislation and policy, however Mapoon continued to be administered by the Presbyterian Church until 1963.  The missionary in charge always carried the role of Superintendent of the Reserve as well as his evangelical duties. 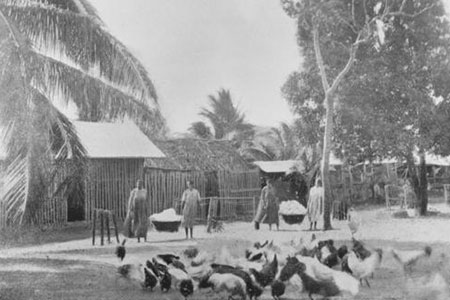 The initial impetus to close Mapoon mission came from a 1953 meeting between the Presbyterian Church and the Queensland Government when the Aboriginal and Foreign Missions Committee ‘was advised that no further aid would be forthcoming for Mapoon unless the Church’ rehabilitated the mission buildings and made the mission ‘more self-supporting by her industries’.   At a conference of church and government officials held at Mapoon in April 1954 a policy decision was made to close Mapoon and evacuate the people to Weipa or other stations, or to ‘assimilate those ready for exemption [from the Protection Act] into the Australian way of life elsewhere’.   The residents of the community were not consulted about the decision but merely told that the closure had been decided.  The population of Mapoon in 1954 was 285.

Between 1954 and 1963, a number of reasons were advanced by the Presbyterian Church for the proposed closure of the mission, including unavailability of local alternative land sites, lack of water supplies, poor soils for agriculture, low potential for alternative industry and the need to assimilate Aboriginal people into Australian society.   By June 1963, the Australian Presbyterian Board of Missions had reduced these reasons to three, namely ‘poor accessibility in loading and unloading boats; poor communication on land because of heavy sand and indifferent soil for gardening.   Both the Presbyterian Church administration and the Queensland Government refused to listen to the people’s requests to keep operating the mission or to move it to a place of the people’s choosing. 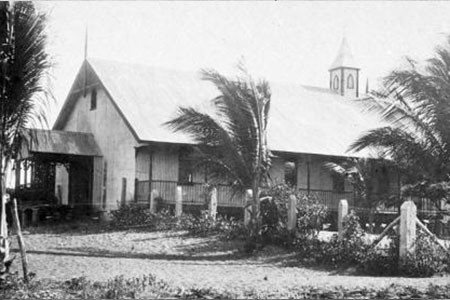 The Government commenced building a replacement community at Hidden Valley near Bamaga in 1961 and by mid-1962 nearly 100 people had moved to the community which became known as New Mapoon.  Traditional owners became increasingly concerned about the Government’s attempts to remove them from their traditional lands and when the Church handed control of Mapoon to the Government in July 1963, they did their best to continue running the community with support from the residents of the Weipa Mission.

On 14 November 1963, the Officer-in-Charge of Police at Thursday Island received official instructions from the Director of Native Affairs, Pat Killoran, to remove twenty-three Aboriginal residents from Mapoon to Bamaga.   The following day the Island Industries Board launch M.V. Gelam sailed into Port Musgrave with two Queensland Police Force officers, Noel Hughes and Jim O’Shea and several Saibai Islander police, whose instructions were to ‘effect the transfer of the families’ listed in the removal order and an Islander work party who were requested to ‘commence demolition of the vacated shanties on the Reserve’.   The leaders of the traditional owners were removed and taken to Red Island Point (now Seisia) to be settled at New Mapoon.  Some of their houses at Mapoon were burnt to the ground to prevent their return.

Within six months all of the remaining seventy-one residents had left Mapoon.   Many of the mission buildings, including the church, were demolished during 1964 by an Islander work party sent down by the Director of Native Affairs.  The only mission building left was the main mission house which remained standing until its destruction by termites in 1991.

After the 1964 closure, former residents led by traditional people such as Jean Jimmy continued to lobby for the re-opening of their community.  In 1974 several families led by Jerry and Ina Hudson returned and ten years later the Marpuna Community Aboriginal Corporation was established.  The Marpuna Corporation gradually built up the community at Rugapayn (Red Beach) to a stage where people were able to resettle permanently and government recognition followed.

On 26 April 1989 a Deed of Grant of Land in Trust (DOGIT) for ‘Aboriginal Reserve Purposes’ under the Land Act (Qld.) and covering 1,839 square kilometres, was handed over to the Mapoon people by the Queensland Government.  The Trustees included several traditional owners.  The Mapoon lands continue to be administered by Trustees appointed by the Queensland Government.  The Trustees work in conjunction with the Mapoon Aboriginal Council with respect to land administration matters.

[These notes are based on Geoff Wharton’s BA (Hons) thesis, University of Queensland, 1996, entitled The Day They Burned Mapoon: A Study of the Closure of a Queensland Presbyterian Mission.]

On 25 March 2000, Queensland local government elections were held and the inaugural Mapoon Aboriginal Shire Council was formed.  In January 2002 the Council moved into its new offices in the main street.

Since that date the Mapoon Aboriginal Shire Council has gone from strength to strength, and the Mapoon Community has grown to approximately 339 people.

The current Council consists of Mayor Aileen Addo, Deputy Mayor Kiri Tabuai and Cr. Dawn Braun, Cr. Daphne de Jersey and Cr. Cameron Hudson. Council is justifiably proud of the new infrastructure in the community including expansion to cabin facilities at Paanja Lodge, upgardes to the barge landing and Aged Care facilities. Soon to be completed projects include a new Cultural Centre and Keeping Place and Community Shopping Complex.